Born in Skipton, England, 1953
Lives and works in Sydney, Beijing and Bali 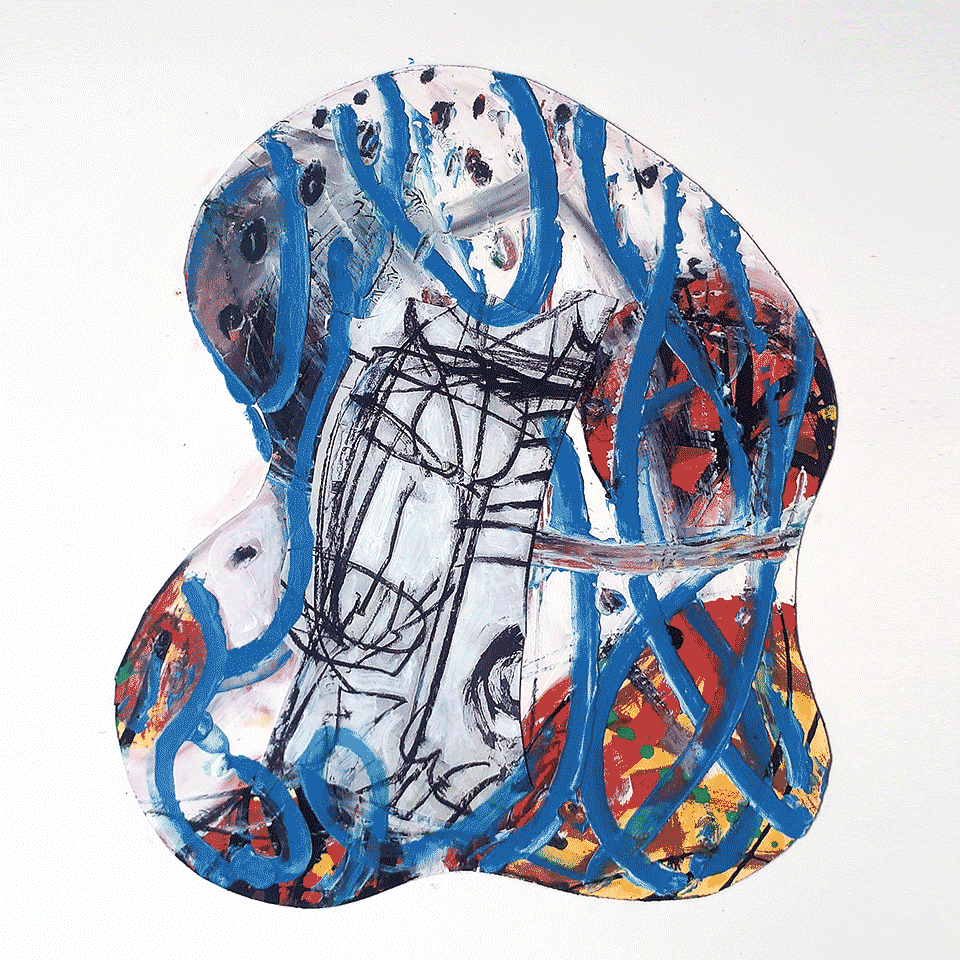 The paintings of Michael Downs are unique. They are shaped and multi-textured and highly coloured. Often they are also back-painted with fluorescent paint so that appear to glow and float off the wall. The shaped nature of the work also creates complex dancing shadows around the painting.

The subject matter is urban landscape. The energies of cities have always fascinated the artist; the complex architectural forms, the incessant flow of traffic and the surging masses of its citizens. The artist also has a fascination with hidden energies; such as the way the wind and rain moves through a city and how the enormous complexities of internet and phone traffic can be depicted.

In order to express the overlapping energies of a city, Downs often plays with both aerial and lateral perspectives and also makes different symbolic forms collide with each other within the painting. The edges of the works are open-ended and fluid to express the apparently endless expansion of China’s urban landscape.

Downs made his first visit to southern China in 1990. In 1998 he visited Beijing for the first time and, since 2010 he has made over twenty long working trips to the country. His studios have been mainly in Songzhuang Artists Village, east of Beijing, but he has also spent time in Kunming, Shanghai, Guangzhou, Hangzhou and Xingtai.

Since graduating from England’s Bath Academy of Art in 1976 (where he was taught by the modern masters Frank Auerbach and Howard Hodgkin) Downs has exhibited his striking and unusual shaped paintings in over 50 solo shows and 300 group shows in twenty countries around the world, including the Pompidou Centre, Paris, the Centro de Cultura Contemporanea, Barcelona, the Barbican Centre, London. the Museum of Contemporary Art, Beijing, and the Osaka Triennale of Painting in Japan.

Downs has been an artist in residence in many countries and many diverse environments and have also been a visiting lecturer at more than fifty art schools and academies across the world including the Royal College of Art, London, the School of the Art Institute of Chicago, the Statens Kunstakademi, Oslo, the VCA, Melbourne, COFA, Sydney, Hong Ik University, Seoul, the Guangzhou Academy of Fine Art and the Hong Kong Art School.

Between 1982 and 1985 he worked in studios in New York including those of the renowned shaped painting master, Frank Stella.

Downs’s striking shaped paintings have feature in two major surveys of twentieth century art; ‘La Ville’, the definitive survey of urban landscape painting between 1900 and 2000 held at the Pompidou Centre, Paris, and ‘Dreams in Twentieth Century Art’ curated by Lyn Gamwell in New York in 2002.

In 1990, he moved permanently to Australia where he gained his MFA at the University of New South Wales and, soon after, became Head of Drawing and then Head of Postgraduate Studies at the National Art School, Sydney. Following this period of his life, he returned to full time painting and embarked on a long series of journeys across Asia, painting shaped works which took on aspects of each environment and exhibiting wherever he went.